New schools must not cause traffic chaos on Bearsted Rd 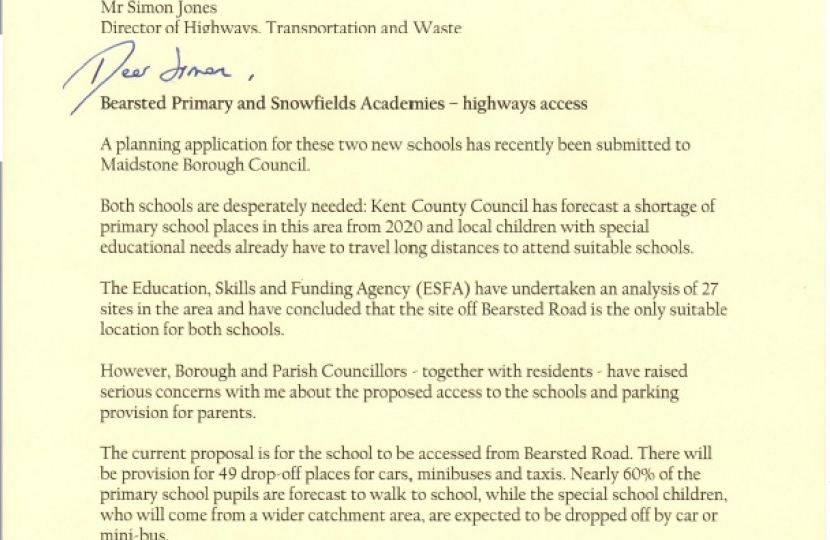 Children from Bearsted, Thurnham, Detling and Maidstone desperately need new schools to go to and I'm pleased that an application has gone in for Bearsted Primary and Snowfields Academy.

But Councillors and residents are worried that having the entrance to the school off Bearsted Road could increase traffic on this already busy road. They are also concerned that there aren't enough parking places included in the plans.

I've written to Simon Jones, Director of Highways at Kent County Council, asking him to look into the possibility of an alternative entrance to the new schools.

"The current proposal is for the school to be accessed from Bearsted Road.  There will be provision for 49 drop-off places for cars, minibuses and taxis.  Nearly 60% of the primary school pupils are forecast to walk to school, while the special school children, who will come from a wider catchment area, are expected to be dropped off by car or mini-bus.

Firstly, I am concerned that the applicant is being too optimistic about the number of children who will walk to school. While I support encouraging more children to walk to school and believe this is the best way of getting to school whenever possible, I am concerned that the assumptions don’t fully factor-in the locations of other schools in the area and the likely catchment area for the new primary school.  In practice, a greater proportion of children may well be dropped off by car.  This means that the number of parking spaces will surely be insufficient and cars may well park up on Bearsted Road.  We know from experience that double yellow lines will not prevent this happening unless actively enforced. Given that Bearsted Road is already busy at morning rush hour, the extra school traffic combined with cars parked up on the roadside could cause chaos.

Local councillors have suggested that it would be better if the schools could be accessed from the Kent Medical Campus, possibly off Gidds Pond Way.  This would avoid the entrance/exit directly onto Bearsted Road.

Can I urge Kent Highways to rigorously test the assumptions about pupil journeys before it submits its opinion to Maidstone Borough Council (MBC) and also investigate this alternative access route.

I am only too aware that there will also be transport problems if the two new schools do not go ahead, as parents will be forced to travel further in their cars if the places locally are not available.  It is therefore essential that everything is done now to make sure the transport plans for these schools make sense.

I am very willing to help in any way I can and am meeting shortly with DHA Planning, which is leading on the highways access design for the schools. I will convey my concern to their team about the potential difficulties with the existing planned access and urge them to fully explore the alternative proposal through the Kent Medical Campus site.

I hope that Kent Highways will look into this as a matter of urgency and I look forward to hearing from you in the near future."

Kent NHS to get extra £5 million to prepare for winter

I’m pleased that NHS services in Kent will be getting an extra £5 million to upgrade facilities this winter.

This is part of a £300 million fund to improve A&E services across the country.