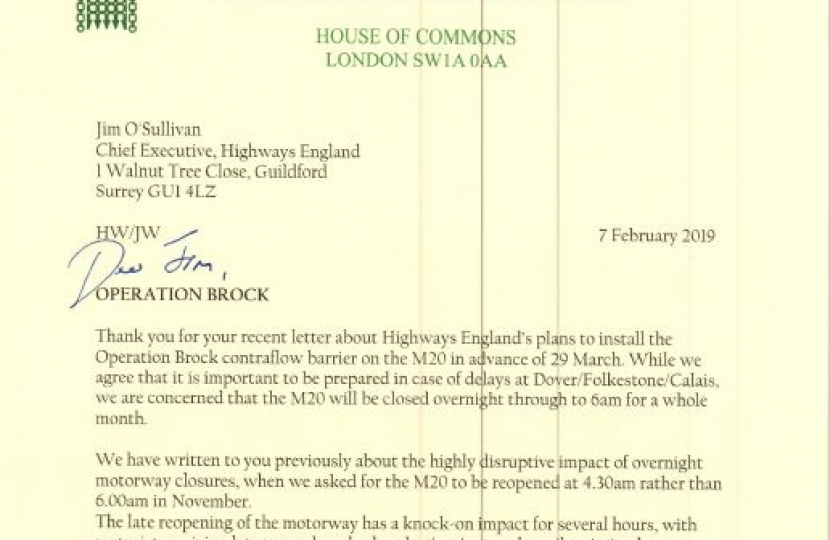 We know from experience how bad it can be when the M20 shuts down all night. Back in November there was a week of dreadful delays caused by overnight closures – with children missing lessons and businesses losing money from late deliveries and people not getting to work on time.

Now the M20 London-bound is scheduled to close between Junction 8-9 from 8pm to 6am from Saturday 9th February to Monday 11th March so that barriers can be installed in preparation for Operation Brock. Narrow lanes and a 50mph speed restriction will operate during the day from 12th February to 11th March.

I coordinated a letter from eight Kent MPs warning of severe delays unless the M20 is reopened at 4.30am

We wrote: “The late re-opening of the motorway has a knock-on impact for several hours, with motorists arriving late to work and other destinations and pupils missing lessons because of delayed buses. The impact on local roads and the congestions caused by the build-up of traffic on the motorway will have a harmful impact on the local economy and businesses,” in a letter to Highways England.

We do need to get the roads ready for Brexit and Operation Brock is an important contingency plan for disruption at the border – but 6am is too late to finish.

Let's get these roadworks done but avoid a traffic horrorshow.

Hundreds of businesses set to reopen in Faversham and Mid Kent

Many of our hospitality and entertainment businesses will soon reopen as we continue to make progress in tackling coronavirus.