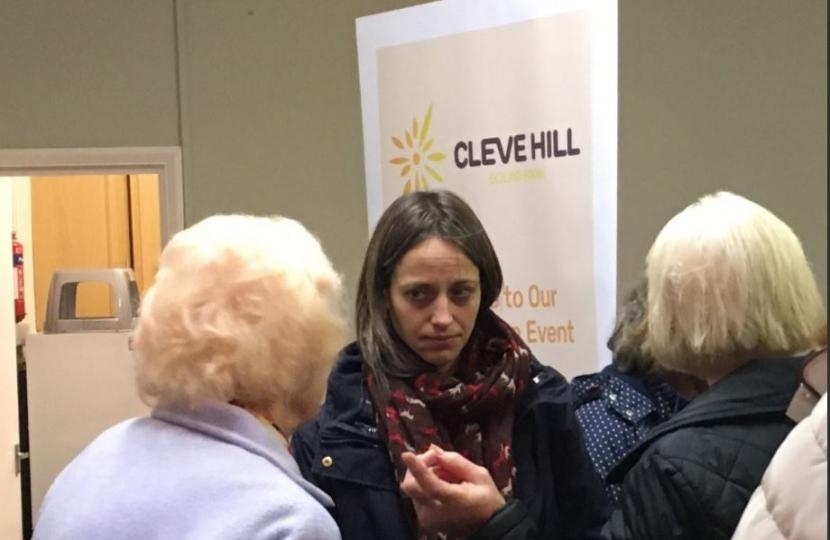 Many people have contacted me about the proposal for a solar park at Cleve Hill in Graveney.

Like most people who I have spoken to or who have written to me, I am keen to see more of our energy coming from renewable sources. But I am also seriously worried about the scale of the proposed Cleve Hill development and how it will affect people living nearby, the environment and wildlife.

In December I attended the developers’ public exhibition in Graveney. Lots of people told me they’re worried about the sheer size of the proposal. It would be five times bigger than any other solar farm currently built or planned in the UK, with panels installed close to the boundary of people’s homes. Views across fields and marsh and out to the estuary would be replaced by rows of solar panels. I strongly believe the developer should be looking at a really substantial buffer zone if this is to go ahead.

People are also worried about the impact of the installation on local wildlife; the salt marshes provide a habitat for a great many birds, small mammals and reptiles. The proposal provides an area for wildlife based on research commissioned by the developer, but no independent review of the wildlife impact has been undertaken. This is something I will be pressing for.

Also concerning is the effect of the development on the countryside itself. Traversed by the Saxon Shore Way, this is a popular spot for walkers and cyclists who enjoy this bleakly romantic landscape little changed for centuries. The vast scale of the solar park cannot help but change the views from the footpaths running through it and along Faversham Creek.

The area proposed for the solar park used to be under water until Graveney marshes were drained, and it remains a flood zone. The Environment Agency is currently consulting on how best to manage flood and coastal erosion in the area. The options include maintaining artificial defences so that the position of the shoreline remains as it is, or allowing the shoreline to move naturally, but managing the process to direct it in certain areas. The Environment Agency suggest that the second option could help prevent future flooding of towns – like Faversham. If this option is chosen, it’s hard to see how it can be compatible with a solar park.

The final concern raised with me is how people in Graveney will be affected while the solar park is being built, particularly by traffic and heavy lorries driving along the narrow lanes to the village.

Over December the developer ran their own consultation. I responded to this requesting that the concerns mentioned in this letter are fully explored. The developer has indicated that they will consult further with residents this spring, to include a proposed site layout. If the proposal is taken forward, this will lead to a formal planning process including public consultation. Further information can be found here: https://www.clevehillsolar.com/

If development is to happen at Graveney, it must be done sympathetically, to a smaller scale with a substantial buffer zone. It must not be detrimental to wildlife, nor should it prevent the Environment Agency taking steps to reduce the risk of flooding in Faversham as sea levels rise. If this is deemed economically unviable, then the developer will need to think again about their proposal.