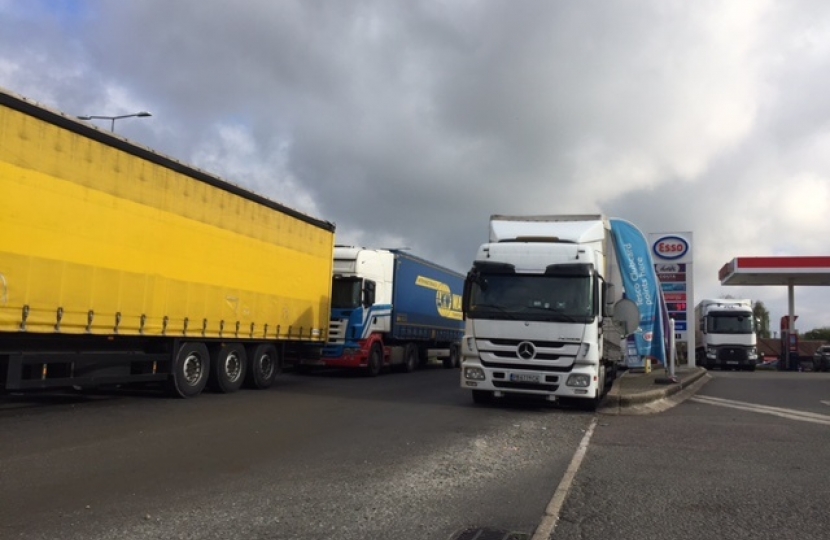 Three people were killed and a man injured in the horrific accident on the A2 last week and my thoughts are with their families and friends.

Sincere thanks to the emergency services who attended the crash and have been doing their best for the survivor.

We don’t know – and may never know – exactly what happened. The Police have appealed for witnesses.

My understanding is the car crashed into a parked lorry. The driver of the lorry was arrested and has since been released.

The accident happened on a stretch of the A2 where there is a problem with lorries parking in lay-bys, on slip roads and mounting the pavement.

Whether this was a factor or not, the attention this accident is bringing to the problem of lorry parking should spur on the work to fix it.

We need more truck stops so drivers can stop when they need to and get a decent rest in hygienic facilities. Stop 24 at Folkestone and the Ashford truck stop are turning lorries away at night because they’re full.

As well as more parking spaces we need tougher rules. While many drivers would rather have their break in a truck stop, I’m told that some – understandably – stop at the roadside to save money. Lorry drivers’ employers need to pay them an allowance to cover the cost of parking, on top of a living wage.

I’ve been campaigning on lorry parking since 2015, pressing for more parking places and a ban on ‘fly-parking’. I’ve been working with Kent County Council, particularly Cllr Andrew Bowles and Cllr Matthew Balfour.

There has been progress, including a trial of ‘clamp-first’ in Ashford and increased fines. So far this seems to be working well and deterring drivers from repeatedly parking in the wrong places. If this pilot scheme is a success I hope this approach can be rolled out across the County and beyond.

A tragic accident has occurred. Whatever the cause, people have been warning for some time that the number of lorries parked in lay-bys and slip roads is dangerous. We need more proper lorry parks and effective enforcement to make sure when we have those lorry parks, lorries use them.