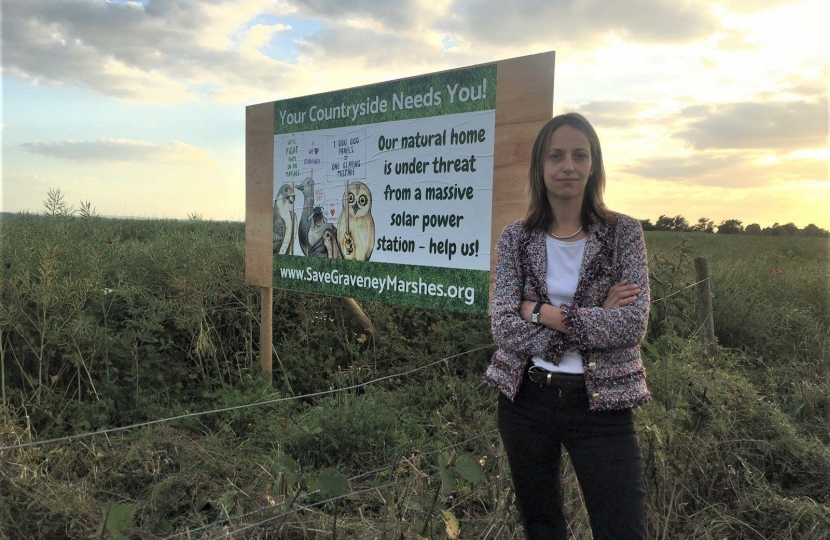 The following statement was read out on my behalf at the open floor planning hearing into Cleve Hill solar farm.

As the local MP for Faversham and Mid Kent, the proposed development of the Cleve Hill solar plant and battery storage facility falls within my constituency. Since the idea of the project first arose, I have received a great number of letters from constituents – not only those living in the Graveney area, but also across Faversham and from further afield. Whilst the common theme has been concern about the proposal, what is clear is that this is not simply what some might view as NIMBYism. There are very real concerns about the damage the solar plant will do to the local environment, wildlife, the local economy, and - particularly during construction - the lives of people living in Graveney itself. People support renewable energy, but the question is, at what local environmental cost.

Today, I want to reiterate some of those concerns - which must be taken fully into account in this planning process.

At nearly 500 hectares - despite being pared back from its original size - the proposed solar plant is vast. It is larger than the footprint of Faversham itself. It’s simply enormous, and far far larger than any other UK solar plant existing or proposed.

Graveney is mostly flat, open countryside - tranquil in summer and beautiful in its bleakness in winter. Find one of the higher spots, Graveney churchyard for instance, and you can see for miles across fields and marsh and creek. These views would be destroyed by rows of black industrial panels. No amount of natural screening will stop you seeing the rows of panels from viewpoints or as you walk along the coastal path. This destruction of the landscape is not only devastating for Graveney residents and walkers from the local area, it will also deter tourists who might otherwise walk this section of coastal path, stopping off in Faversham and spending their money in the local economy.

Whilst this tract of land is not protected by statutory designation in itself, it is surrounding by land that is, and in turn provides a critical space as a wildlife refuge and stepping stone that can prevent species becoming isolated. The most exciting potential future use for this landscape is not as a solar park - it`s as restored wetland where it could support many more rare species, and form part of a nature recovery network.

I recognise that the proposal includes areas allocated for wildlife by way of compensation, which is welcome. However, while the developer argues that this could be better for wildlife versus the current agricultural use of the site, the comparison the Examiner should actually consider is to the wildlife potential of the land once the Environment Agencies plans are fulfilled. The Envinroment Agency has earmarked the site for managed realignment - ie to allow the estuary water to re-flood part of the site and recreate the wetland habitat of centuries ago. This has the potential to become a truly outstanding habitat for wildlife, for the current rare species and the others that would come. Link this to the plans for Nature Recovery Networks in the 25 Year Environment Strategy, which could join up Graveney Marshes to Blean Woodlands and beyond, and you would have a truly exceptional and extensive connected set of natural habitats. As the South East becomes ever more developed, such an opportunity should not be squandered.

Also worrying is the unknown impact of the novel panel arrangement on wildlife. The proposed panel arrangement seems likely to let only a little sunlight to the earth below - so while arguments have been made about wildlife under and around solar panels, that seems unlikely to apply for this site.

I ask the examiner to consider not just whether the developers` proposals will mitigate the impact of the solar plant on wildlife compared to the current land use, but in comparison to the phenomenal potential of the site as a haven for nature in the future.

Add to that the potential for the marshes to act as carbon sink. Recent studies have illustrated the importance of marshland landscapes such as that at Graveney as being critical to mitigating climate change as they lock away carbon. With climate change mitigation being a national priority, I would like to know to what extent the applicant has fully considered the impact of the proposal on this and I would urge the Inspector to take this into account.

I support renewable energy, but some balance has to be struck between the big picture benefits and the immediate, local impact. I don’t feel a balance is achieved here.

I also don’t believe the applicant has fully considered the alternatives to Cleve Hill as a site for a solar plant.

The local impact of this proposal is simply unacceptable. I welcome this hearing, as it is vital that the planning process gives local people a voice. I call on the Examiner to make sure that the voices of my constituents are heard. This must not be a box-ticking exercise, their concerns must be listened to and acted upon.

I’m worried that plans for a solar farm will cover Graveney marshes, harming wildlife and changing the landscape beyond recognition.