How I've voted on Brexit 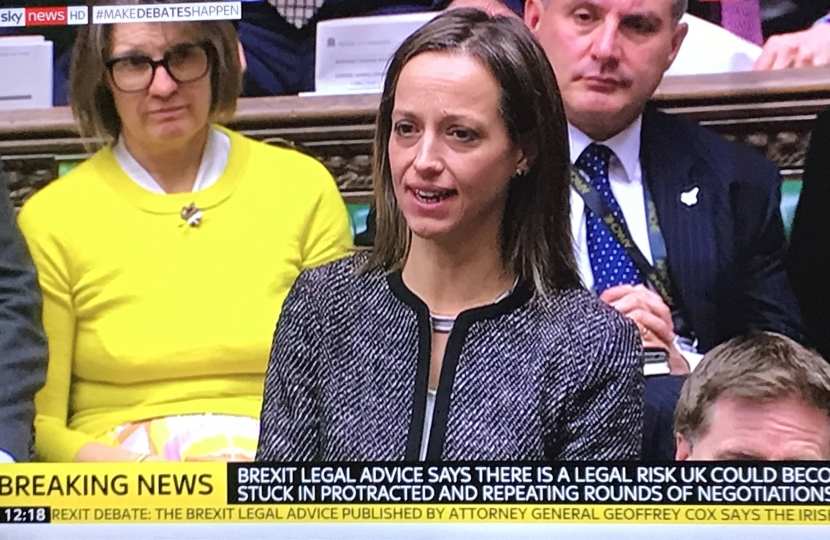 There is no escaping the fact that we find ourselves in a difficult and divisive situation as a country, and this puts MPs in a difficult position too, as we try to work out the best way forward for our constituencies and our country.

My overarching view is that we should honour the referendum result and leave the European Union, and it is better if we leave with a negotiated deal. Our future relationship with the EU should reflect the aspirations of those who voted Leave while taking into account the sincerely held concerns of those who voted to Remain. I’ve held this view consistently since the result of the referendum in 2016.

The Prime Minister’s deal achieves these aims. I do have concerns about aspects of the financial settlement and the Northern Irish backstop, but we need to move forwards. This is why I voted for the deal the first time on 15 January.

Parliament didn’t pass the deal in January, and so the Prime Minister went back to Brussels to seek further assurances. She brought the revised deal back to the Commons on 12 March, and I voted for it again.

There were then two further votes on 13 and 14 March on next steps as Parliament had twice voted against the Prime Minister’s plan. The first vote was whether the House would support leaving without a deal. I voted to keep no deal on the table, but Parliament as a whole voted to take it off. The second vote was on extending Article 50. I voted against the extension, but again the Commons voted for one.

I voted to keep no deal on the table firstly because you cannot carry out a negotiation if you aren’t prepared to walk away. Secondly, because dragging out Brexit is bad for businesses – many have told me whatever happens, they want to end the uncertainty. And thirdly, because when it comes down to it, the country voted to Leave.

I don’t take the risks of no deal lightly, not least given our proximity to the Channel and the risk of queues on the M20. That’s why for the last three years I have been urging the Government to set up an alternative to Operation Stack – which we now have in the form of Operation Brock. I have also visited the Port of Dover, listened to the views of the authorities in Calais, and questioned Ministers on the approach the French are taking and on our readiness here in the UK. It is clear that in the event of no deal there will be some extra checks on goods crossing the border. However, the Calais authorities insist that they will keep lorries moving and that they do not expect long queues.

I’m disappointed that MPs didn’t vote for the deal so that we could leave on 29 March. We then had indicative votes on what versions of Brexit MPs would support on 27 March. I voted for no deal options in these votes and against softer Brexit models like a customs union and a Norway-style Brexit. I think both of these proposals are worse than the proposed deal, which gives us the flexibility to agree a future relationship with the EU which works for our economy.

I also voted against Labour’s proposal for a second ‘confirmatory’ referendum. I don’t want a second referendum. There is already so much anger about, and a second referendum will just make this worse – not least because it could effectively disregard the democratic vote in 2016. There will also be enormous rows about the questions on the ballot paper – for instance, whether to exclude Remain because the country voted to Leave, and whether the deal is the only leave option or should no deal be on there too. Another referendum is not the easy answer some people make it out to be.

The last few days have shown that there is no majority in Parliament for a specific way forwards, so yesterday the Prime Minister invited Jeremy Corbyn to meet her to work out if there is a version of the deal that Labour would support. If so, that could break the impasse.

I sincerely hope that they can agree on an approach that honours the referendum result and gains a majority in Parliament. It is time for us to move forwards.

Please do continue to share your views with me as they do help me to decide what I should do to represent you in Parliament.