Helen speaks out against Junction 8 Development 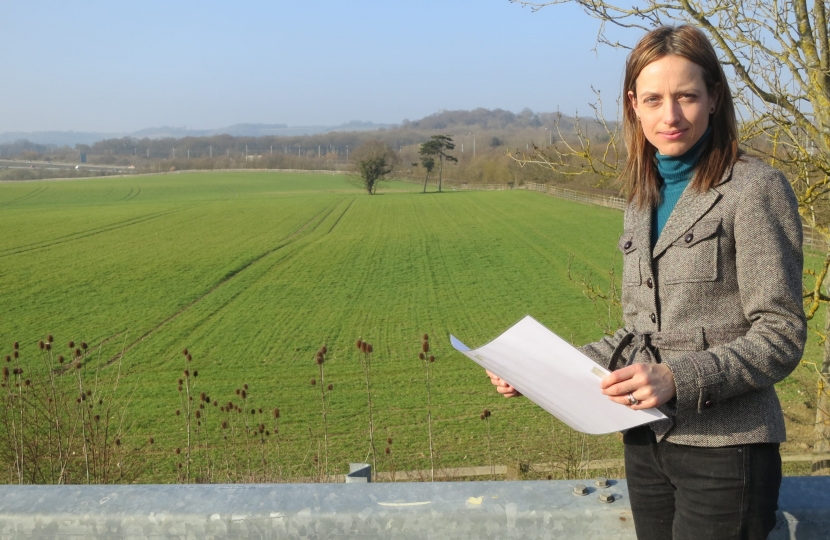 Helen Whately, Member of Parliament for Faversham and Mid Kent, has made a statement opposing the Waterside Park development at the Public Inquiry.

Speaking up for local people, Helen said:  “Almost everyone I've spoken to who lives near Junction 8 has brought up their concern about the development proposals. People are desperately worried.  The construction of Waterside Park would change the landscape forever, in such a precious area close to Leeds Castle and the AONB as well as the villages of Hollingbourne, Bearsted and Leeds."

Helen also raised concerns about the potential effect of the development on Leeds Castle and local tourism: “I'm especially worried about a prominent industrial site so close to Leeds Castle.  It's a national treasure, and just as the castle itself needs looking after, so does the landscape around it. This would change the experience for visitors, and anything that reduces visitor numbers would also have a knock-on effect on the livelihoods of people involved in tourism locally.”

Helen acknowledged the importance of making sure there's sufficient employment land for local businesses, but was clear in her view that there are other sites in the Maidstone area that would be more appropriate for development.

1. I am Helen Whately, the Member of Parliament for Faversham and Mid Kent. The appeal site, Waterside Park, is located in my constituency.

2. During the general election campaign between March and May 2015, I had the opportunity to meet many constituents who live in the vicinity of the Waterside Park site. I have also received many emails and letters. Residents, particularly those living in Hollingbourne, Bearsted and Leeds villages, are very concerned about the threat of development around Junction 8, and particularly the damage this would do to this attractive stretch of countryside abutting an Area of Outstanding Beauty (AONB). Residents have also raised concerns about the extra noise, air and light pollution that they will have to suffer if the development goes ahead.

3. This area of countryside is also part of the Parklands of Leeds Castle. Leeds Castle is a Grade 1 Listed Building, described as "the most beautiful castle in England." The proposed development will have a serious, detrimental effect on the setting of the castle, an important tourist attraction which provides jobs and income to many people working and living locally. Industrialising this site will devastate the parkland setting which provides the entrance to the castle grounds for visitors approaching from the M20. It will irreversibly detract from the experience of visiting the castle which at present attracts approximately 500.000 visitors per year.

4. In addition, this stretch of countryside important "Green Lung" and a recreation area for the people who live in Maidstone and the surrounding villages for activities including cycling, horse riding and rambling.

5. Focusing on the landscape, I note that the NPPF states that planning should "Conserve heritage assets in a manner appropriate to their significance, so that they can be enjoyed for their contribution to the quality of life of this and future generations". The Planning Minister of State, Brandon Lewis, in a letter to the Chief Executive of the Planning Inspectorate dated 27th March 2015 states; "I have become aware of several recent appeal cases in which harm to landscape character has been an important consideration in the appeal being dismissed.  These cases are a reminder of one of the twelve core principles at paragraph 17 of the National Planning Policy Framework - that plans and decisions should take into account the different roles and character of the different areas, and recognise the intrinsic character and beauty of the countryside - to ensure that development is suitable for the local context."

6. The letter goes on to emphasise the importance of AONBs, stressing that they should enjoy the highest protection but pointing out that outside these designated areas the impact of development on the landscape can be an important material consideration. The letter points out that a full account should be taken of the environmental as well as economic and social dimensions.

7. Another concern that I share with local residents is that such a development would set a precedent, leading to a flood of development applications to develop other greenfield sites around Junction 8 of the M20. I understand that a similar application has already been submitted for the nearby site of Woodcut Farm.

8. The community has already fought off the Kent International Gateway development which was recognised both by the Inspector and the Secretary of State as inappropriate. We must protect this precious landscape, so close to an Area of Outstanding Natural Beauty and to an outstanding national heritage site (Leeds Castle). It is time to put a stop to speculative applications around this junction and allow residents to live their lives without the continuous threat of industrial development.