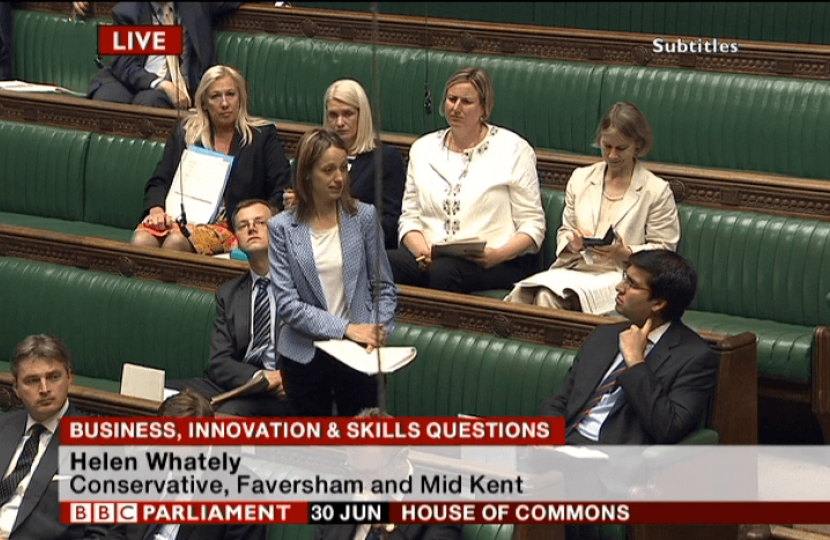 During a House of Commons debate on Business Regulation Helen spoke up for the many pubs in Faversham and Mid Kent, as well as for local Breweries, Shepherd Neame and The Whitstable brewery. The Whitstable Brewery is based in Grafty Green.

Talking about the local breweries and pubs, Helen said;

“These local businesses are important as employers, and for their role in rural communities. Outdated bureaucracy is one more hurdle for them to overcome.”

Helen outlined some of the administrative problems pubs have raised with her and asked the Minister for Small Business, Industry and Enterprise, Rt Hon Anna Soubry , what more could be done,

“Pubs are required to advertise changes in their licence, costing about £500 a time, and many local authorities require licence fees to be paid by cheque, rather than allowing more modern methods of payment. What steps will the Government take to reduce the burden of bureaucracy on pubs and breweries?”

Helen received an assurance from the Minister that the Government plans to review onerous regulation and remove it if necessary. Speaking after Business Questions Helen said,

‘Pubs and breweries are significant local employers and play an important role in the community. I used the Business Questions session in the House of Commons to bring some specific examples of bureaucracy to the Minister’s attention. This is part of my campaign to stand up for local businesses and make sure they are helped, not hindered, by Government ’