Have your say on huge solar farm on Graveney Marshes 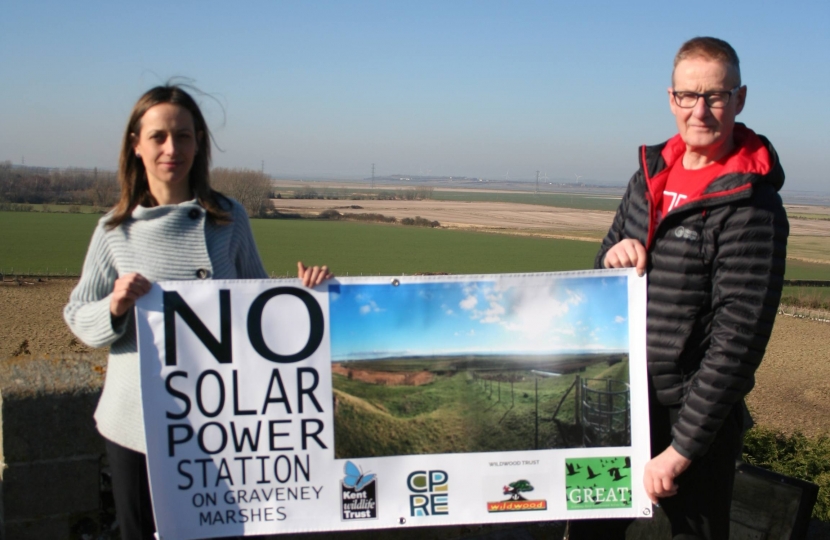 I’m seriously worried that this enormous solar power station will industrialise swathes of open countryside. Rather than being good for the environment it could actually do a lot of harm. Lots of people have told me how unhappy they are about it – and it’s important that people in Faversham are listened to.

Anyone who wishes to speak at one of several public ‘Issue Specific’ hearings on subjects such as traffic and biodiversity should register to do so by Wednesday 26th June by visiting https://infrastructure.planninginspectorate.gov.uk/projects/south-east/cleve-hill-solar-park/?ipcsection=overview.

I’ve been lobbying the Environment Secretary, making the case that the great environmental potential for Graveney Marshes is as a habitat for wildlife. The Environment Agency has made plans for the area to be re-flooded and that would create the most wonderful wetland area – great for biodiversity and also as a carbon sink. I’m pleased to see that Michael Gove has followed up with the Energy Minister and the Environment Agency. Mr Gove wrote to the Secretary of State for BEIS (Business, Energy and Industrial Strategy), who will make the final decision on whether the power plant can go ahead, explaining that the development would be five times the size of the largest solar scheme consented or planned. Read his letter here.