Have your say on the future of our health service 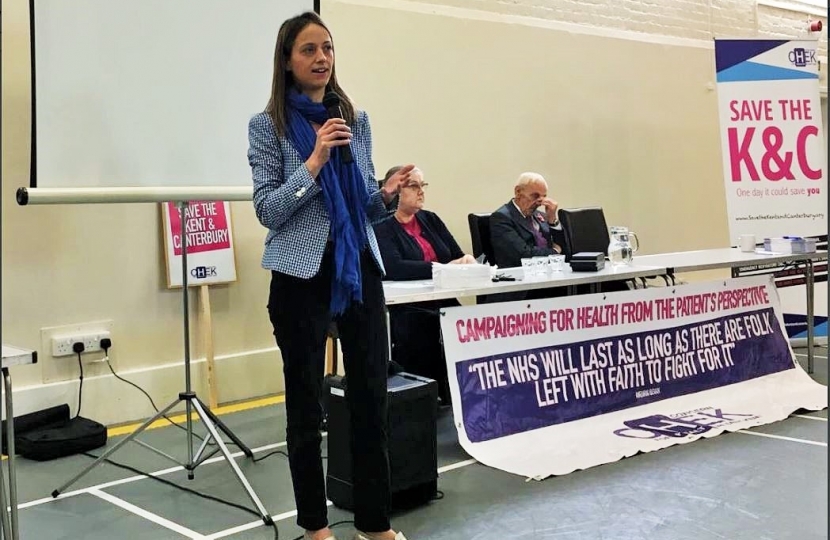 I'm hosting a public meeting, along with Concern for Health in East Kent [CHEK], to give local people the chance to have a say on changes to health services.

There will be an update from Glenn Douglas, who is overseeing work on the future of Kent and Canterbury Hospital as head of the Kent & Medway Sustainability and Transformation Partnership [STP]. Then there will be a question and answer session. Michael Ridgwell, Programme Director of the STP, Patricia Davies, Director of Acute Strategy, Caroline Selkirk, Managing Director East Kent CCGs will be on the panel alongside Glenn Douglas. A representative from East Kent Hospitals Universities Foundation Trust has also been invited to give the hospital’s perspective.

NHS leaders are planning to reorganise acute services in East Kent’s three major hospitals. The two proposals on the table right now are either emergency care in QEQM and Ashford and elective care at K&C, or a new hospital at the K&C which would include a new A&E.

A developer has offered to make a significant contribution to the costs of replacing the existing hospital, alongside building 2,000 new homes nearby.

Everyone in East Kent will be affected by changes to our health services, and I’m determined that the voice of local people is heard. In the next few months there will be a public consultation on how acute services will be arranged across east Kent’s three hospitals.

What patients really need is an excellent new acute hospital and more services closer to home. As a major population centre with great transport links – and soon a new medical school – Canterbury is the right place for a major hospital. But at the moment there are no acute service there, and patients are having to travel to Ashford or Margate. The option of a new hospital in Canterbury must be included in the consultation – if it isn’t how can we say that people have been properly consulted?

I’m hosting this public meeting, along with CHEK, so that those responsible for deciding the future of Kent and Canterbury Hospital can explain what they’re doing, and listen to local people.

We have a chance to put an end to the drift of services away from this area, the downgrading of facilities and the struggles to recruit staff, so I urge everyone who cares about local health services to come to this meeting and have your say.