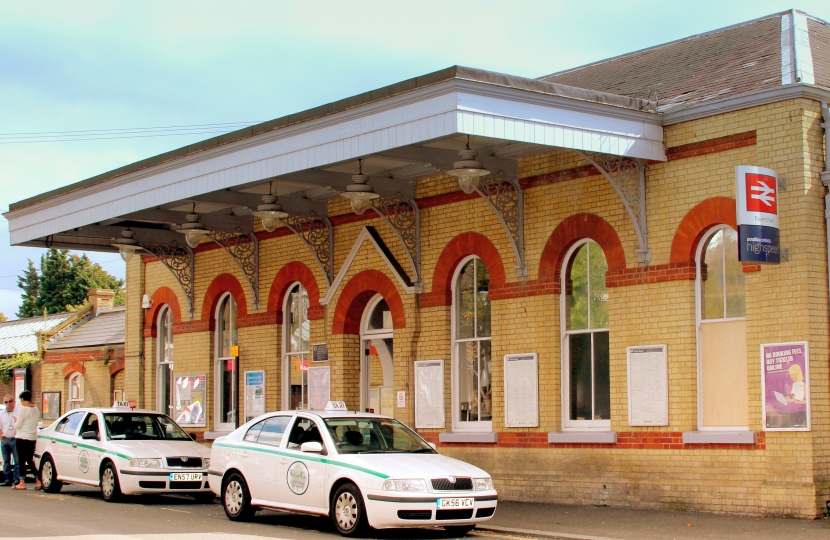 Faversham Station once embodied the thrill and romance of the Victorian railway. One family living in The Mall built a special platform in the garden so their children could watch as it was built. The Lord Mayor of London held a sumptuous dinner in the Assembly Rooms to celebrate the opening in 1858.

The Grade II listed building is an important part of the town’s heritage, but it’s become run down. Whether you’re a commuter on your way home or a tourist visiting for the first time, the station is the gateway to Faversham and it should provide a proper welcome. That’s why I’m backing the Faversham Society’s campaign to restore it to its former glory. I’ve organised a series of meetings with rail representatives, and so far we’ve succeeded in getting over £1 million of investment in the station.

New lifts have made travel so much easier for disabled people, parents with buggies, passengers with heavy luggage and anyone who can’t use stairs. We’ve also had works to renovate the toilets, fix damp problems and replace canopies. And this Friday (26th April) I’m opening the new and improved footbridge at Preston Lane, which has been strengthened so it can stay open during events like the hop festival. There’ll be a fete at St Catherine’s Church with stalls, refreshments and organ recitals so please do come along if you can.

The campaign to restore the station is chuffing along, but there’s still more to do. Southeastern currently operate the trains, but their franchise is about to run out. I recently wrote to the rail minister calling for the next franchise operator to be obliged to renovate the station as part of their contract. Whoever takes over from Southeastern also needs to make sure the trains are more reliable, better value and faster.

We also need investment in infrastructure. The South East is the busiest and most congested part of the entire rail network. Last year there were more than 1.5 million journeys through Faversham station. There are 5,000 passenger trains a day connecting Kent to London, Surrey, Sussex and continental Europe. But the South East has also endured years of under investment, with spending on maintenance 21 per cent below the national average. That’s about to change as the Government has allocated Network Rail over £4 billion for infrastructure in the South East. This will go towards replacing 662km of track and 55 bridges - I’m determined that Kent must get its fair share.

The minister has confirmed that Southeastern and Network Rail will work with me and the Faversham Society on the future of our rail services. I’ll be pushing for a station that’s truly first class.

Hundreds of businesses set to reopen in Faversham and Mid Kent

Many of our hospitality and entertainment businesses will soon reopen as we continue to make progress in tackling coronavirus.